In the range of 2.5 to 7 ft, all you have to do is point the camera to your subject, focus and shoot. Sounds simple, however, if you want to do this successfully, you have to take certain precautions: First you have to limit your background. Second, you have to crop the final images for the correct stereo window.

I see this in our stereo club. Some people take pictures with objects from 4 ft to infinity. This is too much for me. Such pictures cannot be viewed comfortably in projection. It is also impossible to mount them properly using standard stereo mounts. (Note: Some people attempt to mount such pictures using a technique called “double depth”. This technique eliminates “window violation” while keeping this excessive amount of depth. Personally, I prefer to keep the background a stereoscopic deviation within limits.)

How do you block the background? By altering the composition. For example, put your subject closer to a wall or other natural barrier, use a flash (background is dark), shoot a picture of a dog or cat looking down, etc.)

We can construct a Table which shows the maxium object distance for a certain near distance. I have done this in the previous posting for 4 focus distances. For example, if the near object is at 4 ft (1.2m), the far object should be no further than 10 ft (3m).

As it turns out, you don’t need this Table because it is built into the Stereo Realist’s Depth of Field (DOF) scale. If you line up the near object distance with one of the f8 marks, the other f8 mark will show you the far object distance. For example, in the picture here one f8 mark is at 3ft (near distance). The other is at 5 ft (far distance). (Note: If your Stereo Realist does not have a DOF scale - earlier models did not come with one - I have these for sale in my web page)

I credit Charles Piper for pointing this out. As it turns out, both the stereoscopic deviation and the depth of field have an inverse relationship to the distance. So we can use the DOF information to derive stereoscopic deviation information. There is nothing mystical about this. It is a coincidence that allows us to kill two birds with one stone.

The f8 pointers correspond to 1.2mm, which is generally accepted at the maximum allowable on-film stereoscopic deviation. Charles Piper followed a more conservative approach and used the f5.6 pointers. These correspond to 0.8mm deviation and it is safer for stereo projection (in general, “less is better” when it comes to stereo projection). 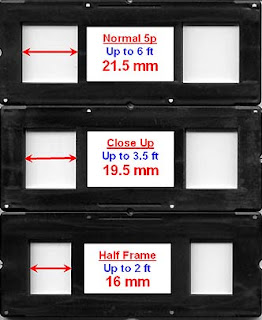 Revisiting your highly informative blog posts and wanted to thank you for putting this information out there! When I first read them with little experience shooting, it was hard to digest the technical aspects, but it sure makes a lot of sense now. The empirical evidence supports all the theory! I am curious about the “double depth” technique you mention. Has anyone written about this?