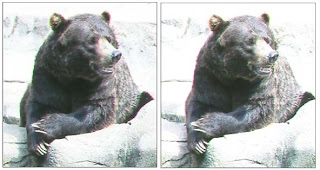 This technique is used for wild animal photography and assumes two things: 1) The near object is far away from the camera, and this is the reason for using long FL lenses. 2) The background is limited (there is no infinity and the depth range of the scene is restricted). These two conditions ensure that the stereoscopic deviation remains under control. (As we showed in the previous posting, under constant magnification and narrow depth range, p ~ B/F, so doubling B and F results in the same stereoscopic deviation.)

Two examples are shown here: The bear was photographed in the Cleveland zoo using 135mm lenses. At first, I took the picture with the camera side-to-side (6 inches). I was not happy with the depth compression so I tried increasing the stereo base to follow the PePax principle (10 inches). The results looked better. When I entered this picture in Detroit, someone asked me how could I come so close to the bear with my Realist, an indication that the picture looks like it was photographed closer with shorter FL lenses. 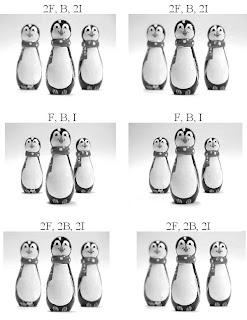 The three bowling pins have been photographed and are shown so that the front pin has the same size (constant magnification). The depth range is also limited. The middle picture is taken at F, B, I. For the top picture the camera is moved twice away from the subject (2I) and the focal length is doubled (2F) but the stereo base remains the same. This picture (2F, B, 2I) shows depth compression, compared to the (F, B, I). In the bottom picture, we have doubled the stereo base (2F, 2B, 2I). This bottom picture compares well with the original one.

So, What's the Catch?

By increasing F and B proportionally we make further objects, photographed with a longer lens, look as if they were photographed closer with a normal lens. This sounds too good to be true. As a matter of fact, it is too good to be true! To understand how the resulting pair differs from the “ortho pair”, compare the top and bottom figures of the bowling pins. Even though the depth is increased and the compression seen at the top is partially eliminated, the bottom picture is still different from the middle (which was recorded from closer). The difference is in the perspective, or the relative sizes of objects at different distances from the camera which has not changed. As a result, distant objects appear larger than nearby objects or nearby objects appear smaller than distant objects. This is direct result of trying to fool the brain into thinking that we are closer to our subject when we are really further away.
Posted by DrT at 2:13 AM