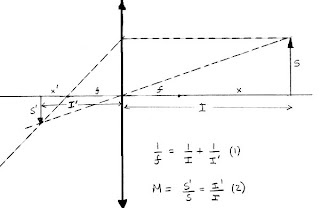 To make a lens focus closer than its minimum focusing distance, one can use extension tubes or bellows. This is of course possible only if the lens can be removed from the camera. The basic equations in work here are the fundamental lens formula and the definition of magnification. I will write these as follows (see also this blog):

I am using this notation: f = focal length, x' = lens extension (distance of lens from film plane), I = Subject distance (distance of subject from lens), also known as working distance because it shows you how much room to you have to work with your subject, M is the magnification.
An interesting situation exists at M=1. In this case, I = I' = 2F, i.e. the extension is equal to the working distance and it is equal to two times the focal length. For example, if you are using a 50mm macro lens at M=1, then the subject is at 100mm in front of the lens and the image is formed 100mm behind the lens. As it turns out, the total distance from object to film plane (4F or 200mm) is the smallest possible. As you increase the magnification beyond 1, the image moves quickly behind the lens and a bellows system will be needed. For best optical performance, it is recommended that the lens is reversed when M > 1

Another note of practical importance: At magnifications close to 1 or higher, focusing is not done by changing the distance of the lens to the film plane, because this changes the magnification. Focusing is done but my moving the lens and camera closer to the object. So, in macro stereo photography, first you set the magnification by fixing the extension I', and then you focus by changing the working distance I. For stereo photography with a slide bar, you might need a stereo bar with two axes. The vertical axis is used for stereo translation. The horizontal axis is used for focusing.
Posted by DrT at 5:49 PM