Yesterday I spent a good part of the day creating remote cords to fire the Contax/Yashica camera (2d or 3d). The focus was on a cord for twin cameras. I have been through this with two different camera systems in the past, once with my Minolta X-700 cameras and once with my Pentax ZX-M cameras. 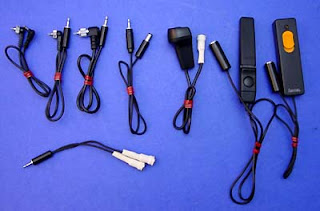 I took some time to think about it. With the wireless infrared remote (WIR), I had a cord with a Contax/Yashica plug in one end, and a simple 2.5mm Mono plug in the other. So I decided to base my connections in 2.5mm mono plugs and jack inlines.

The picture above shows the following (from left to right):

1. Original Contax cord from WIR (plus is at right angles)
2. Cord I built using the C/Y plug and a 2.5mm MP.
3. Similar cord but with a Minolta plug for my Horseman.
4. Same but with a plug for my RBT S1
5. At bottom: Connector cord with two inline jacks on one end and a 2.5MP on the other.

I also created 3 switches from the left over material, to fire the cameras: One from the Minolta release, one from the Contax release, and one from a Hama release. 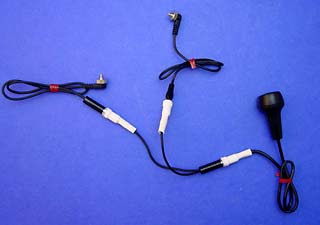 Cords 1 and 2 can be used with the connector cord to fire twin cameras (see picture of the connection). They can also be used to fire single cameras, when attached to one of 3 switches or in the WIR.

Cords 3 and 4 can be used to fire the Horeseman 3D and the RBT S1 cameras, again either alone or when attached to the WIR.
Posted by DrT at 9:23 AM