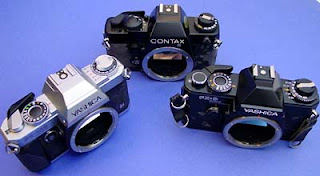 In the short period of about a month between getting my first and second Ochotta stereo cameras, I have accumulated a plethora of Yashica/Contax camera equipment, thanks to ebay (of course!) but also KEH. KEH prices might be a bit higher than average market/ebay prices but they sell quality equipment and they have great customer service. If you are impatient and don’t like to take risk with ebay sales, then I definitely recommend KEH.

Both Yashica and Contax have a long history of producing photographic equipment and neither company is in existence today. In the past I have owned Minolta (X-700 etc) and Pentax equipment and of course everyone knows Nikon, Olympus, and Canon, but Yashica and especially Contax are not as popular as the these other cameras.

Contax was founded in 1932. One of their most important cameras is the Contax S (1949), considered the mother of all SLR cameras. Yashica was founded in 1949 in Japan. Among their successful cameras is the Electron 35 (1965), a popular Rangefinder camera. In addition to their 35mm cameras, Yashica is known for their Medium Format cameras.

In 1975 Contax entered a partnership with Yashica and it became a Japanese company. Yashica continued to produce camera equipment both under the Yashica and Contax brands.

In 1983, Yashica was acquired by ceramics giant Kyocera (Kyoto Ceramic Company). Kyocera, facing fierce competition in the camera market, terminated all camera production in 2005. It continues to offer after-sales service to its customers for a maximum of 10 years for each model.

Of interest to me are three cameras: Yashica FX-D, Yashica FX-103, Contax 139Q. These cameras have a lot in common and were used by Fritz Ochotta to make his stereo cameras:

From the three camera of interest, the Contax 139 (introduced in 1979) is the more deluxe model, offering, in addition to the features above, the following: 1) TTL flash, 2) DOF preview button, 3) Double exposure button, 4) Lens aperture visible through the lens.

The latest of the 3 cameras is the Yashica FX-103 (1985, left on the picture above). It offers TTL flash metering and Program exposure modes.

Average ebay prices today: $50 for Contax 139. Around $20 for a Yashica FX-D or FX-103. You can easily find a deal with camera, lenses and accessories for around $50 or so. It is amazing to me that you can buy these wonderful cameras for $20. You cannot blame me for acquiring a dozen or so camera bodies in one month! It is actually more expensive to buy a Contax/Yashica cable release than to buy the camera itself.

Some links for further research: