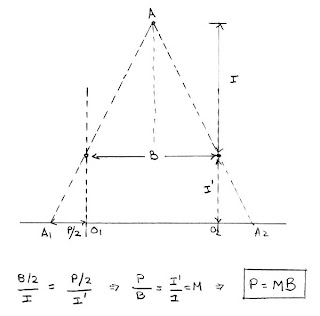 Consider an object A at a distance I from the lenses of the stereo camera, which are separated by B (stereo base). An object at infinity is formed at O1 on the left side and at O2 at the right side, while the image of A is A1 and A2. The situation is symmetric so half the stereoscopic deviation (or parallax) is P/2. From similar triangles we have:

From our previous posting we know that the ratio I'/I is the magnification M. So we get:

This is the basic stereoscopic equation. I cannot help but make the following analogy: Variables in the image space (with prime ') are related to variables in the object space through the magnification. For example, I' = M I, s' = M s, and here we have P = M B, so we can think of P as B', in other words, the stereoscopic deviation is the “image space” equivalent of the object space stereo base.

If the subject is far away from the lens we can use the low magnification approximation and write (2) as follows:

Equation (3) gives the parallax with respect to infinity (remember, we measured P from point O which is a point at infinity). If we have a near object at Imin and a far object at Imax, then the stereoscopic deviation equation can be written more generally as: