In a previous posting we looked at the three variables that affect a stereo image, the stereo base (distance between lenses, B), the focal length of the lenses (F) and the distance from the subject. A conventional stereo camera has fixed lenses so the only way to affect the image is by changing the distance to the subject. Going beyond the stereo camera usually means changing B or F. From these two variables, the stereo base is perhaps the easiest variable to experiment with, since any camera (including a stereo camera) can be used in two successive exposures to record stereo pairs with any desired stereo base. 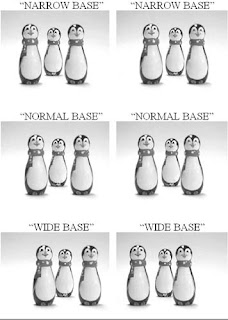 The effect on the deviations is pretty clear from the fundamental stereoscopic deviation: p = FB/I, but how increasing B makes the scene come closer or appear smaller? The figures on the left might will help clarify this.

Consider the series of pictures of the 3 bowling pins, taken with different stereo bases. These pictures are shown here exactly as recorded (with a slide bar) with no attempt to adjust the stereo window. It is clear that the image is shifting towards the inner edge of the frame with increasing base. From our discussion of the stereo window we know that when the film chips are pushed closer, the scene appears to be moving towards the observer. Stereoscopic viewing of the bowling pin pictures confirms that this is indeed the case. Increasing the stereo base does make the scene appear closer to the observer. 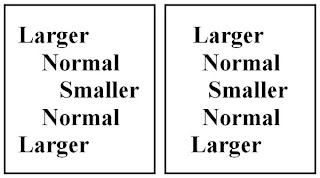 This is a direct consequence of the previous effect. The actual size of the objects does not change but when the stereo base increases they appear to be closer, so our brain concludes that they must be smaller.

This is a little more subtle to observe and is more pronounced in stereo projection than freeviewing on this page. But let's try it: Consider the series of letters in the stereogram here. All letters have the same size. The relative shift of the letters (artificial deviation) makes the ones in the center (“Smaller”) appear closer to the observer. Hence they look smaller. The ones in the back (“Larger”) appear the furthest from the observer hence they look larger. It might take a little while for this to be clearly seen. Stereoscopic viewing is absolutely essential to experience this. If instead of parallel, you use cross-freeviewing then the opposite effect will be perceived, i.e. the “Larger” will be forward and smaller and the “Smaller” will be pushed the back and appear larger.
Posted by DrT at 11:33 PM