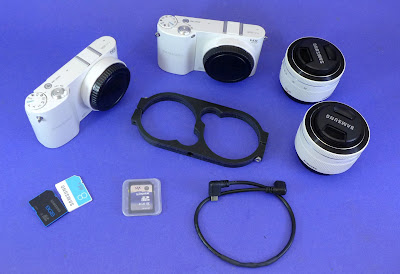 I documented the procedure for future reference:
Test each camera: Since most cameras are bought used/pre-owned or refurbished, I recommend testing each camera when it is received: Charge the battery, turn the camera on, reset the menu, and take some test pictures to make sure everything looks OK. Also, test the remote plug to make sure it is working.
Mode Switching: A peculiar issue has been reported with some of these cameras. When the mode switch it touched, the camera switches modes. This can be a big problem when shooting because while the camera is switching modes, you cannot take pictures. An extra problem in stereo is one camera selecting a different mode than the other, throwing the pair out of synchronization (if a mode other than P, A, S, M is selected) or resulting in different exposures. I had several cameras that showed this to various degrees. Here is a solution: Spray a contact cleaner around the switch (Ray Moxom recommended a product called CRC 2-26), turn the switch around for the cleaner to make its way to the contacts. This has solved the problem for me. The problem might come later so you might need to repeat this, but the situation is manageable.
Install the latest firmware (1.15): It has been reported that this improves synchronization. Google to find the files and follow the directions. Note: Installing a firmware resets the menu so don’t make any menu charges before you install the firmware because you will need to do it again..
Perform the “Flash Test” to get an idea about the synchronization of the pair and decide which is will be the right (R) camera and which will be the left (L) camera. This test is detailed here:
http://drt3d.blogspot.com/2017/07/flash-test-for-twin-nx1000.html
After this test, mark the cameras R and L.
Change the Menu Settings: Different people have different preferences. I am open to suggestions. Shown in this figure are the settings that I change. The figure shows the default settings after a camera reset. My changes are described below. 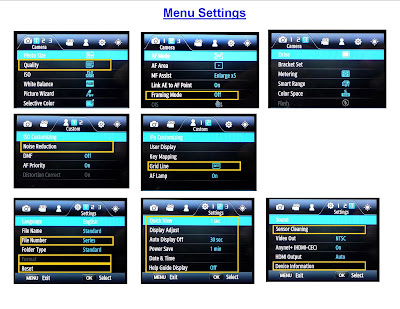 There are 5 menus. I will describe the changes as you move through the menus from left to right:
Camera 1: Change quality from F (Fine) to SF (Super Fine). There is no reason not to use this Super Fine setting to get he highest quality JPG files.
Camera 1: An interesting setting is called “Framing Mode” which is OFF by default. When the exposure is dark (using a flash, for example) the display will be dark. By turning this setting ON, the display brightness is constant regardless of the camera settings, so you can frame the shot better. I like to have the framing mode ON on the R camera and leave it OFF on the left. This way I can frame and still have an idea of what the ambient exposure is when I use flash. I discuss this in my flash blog:http://drt3d.blogspot.com/2017/07/flash-with-samsung-nx1000-twin-camera.html
Custom 1: I like to turn the Noise Reduction OFF. If this setting is ON, then after a long exposure the camera will process the images to reduce noise, which takes time. I learned this the hard way when I was shooting fireworks one night. Most people agree that, if needed, noise reduction can be done later with software.
Custom 2: I like to turn the 2x2 grid ON. It helps with composition and alignment of the cameras.
Settings 1: This is the menu to reset the menu, format a memory card or change the file number. Regarding the file numbers, I like to initialize the right camera’s file numbers so the numbers from the two cameras do not overlap. If they overlap, StereoPhoto Maker cannot do autolignment and the files must to be renamed. Having totally different file numbers avoids this extra step. The aligned pair from SPM uses the naming of the L camera so it is OK to initialize the R camera’s numbers.
Settings 2: First, I turn the “Help Guide Display” OFF because it drives me crazy. This is the first thing I do when I change the menu. Then I change the Date & Time. I finally change the different times as follows:
- Quick View: I increase it to 5 seconds because I like to have more time to inspect the picture. (One can consider put it on Hold)
- Auto Display: I leave it at the fastest time of 30 seconds, to preserves battery.
- Power Save: I normally increase it to at least 5 minutes because I do not want the cameras to turn off too often. If the cameras turn off because of inactivity, I turn their switches to OFF and ON again.
Settings 3: Sensor Cleaning: I turn the Sensor Cleaning ON at startup. This gives me time to turn the two cameras on one after the other, without one camera firing. I discuss this in the blog on how to use the cameras.
One last but important setting that needs to be changed: 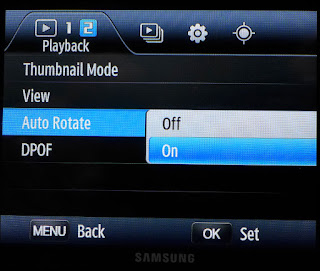 In preview mode, press the menu to go to the Playback menu, in the second screen, change the Auto Rotate of the Left camera to OFF. By doing this, when the cameras are in the z-configuration (with the left camera upside down) the preview image is straight. This way it is even possible to freeview the R and L images. I guess you could change both cameras, it does not matter.
Test the camera pair: With the cameras tested for synchronization and the menus adjusted, I test the cameras by taking pictures at different settings, including flash. If everything looks OK, then I do the last step.
Remove the (closest to the lens) lug strap: This is only needed if you want to get the cameras as close as possible (68mm). It should be done last because if there is a problem with the cameras, you cannot return them or sell them for 2d use with the lug removed. In my first pair, I tried to disassemble the camera to remove the lug. Even though I had directions, the operation was too involved with lots of parts needed to be taken out, so I gave up and just cut the lugs off. Here is how I do it: 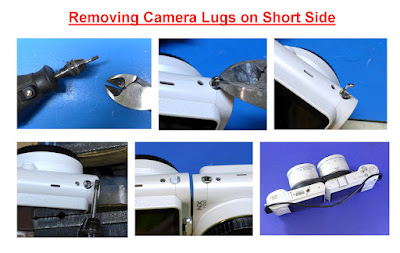 I use a pair of metal snippers and a rotary tool with a cutter bit. First, I cut the lug. Then I use the rotary cutter to remove the remaining metal and make it smooth. After this is done, the cameras can touch each other.
With the lugs removed, I connect the cameras with the body mount and the remote cable. I put the cameras on a steady support and zoom at the long end of the lens (50mm). I then adjust the cameras to achieve good alignment and tighten the screws of the mount. See details here too:
http://drt3d.blogspot.com/2016/10/z-mount-for-samsung-nx-cameras.html
The final camera rig is ready to go: