Adventures of an International Film Traveler

This blog is based on an article that I wrote for the Stereogram (13.1, with the same title). 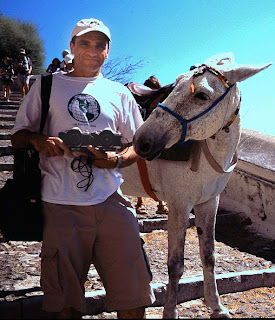 <- If this donkey could talk, what would she say? Most probably she would ask about the weird two camera jig I am holding in my hands. [Photo taken by my son with my S1 -in Santorini]

Packing stereo photo gear is a fine balance between taking all the equipment that I might need and keeping my camera bag small and light enough to carry around.

This year I decided to take the following:

1. RBT S1 and flash. This is my favorite all-around stereo camera.

2. RBT X2 with a Tokina 28-80mm zoom lenses as a backup to the S1 and also for its zoom lenses. I bought this camera from ebay and have only ran a test roll. It is a type C configuration (65mm lens spacing, only 13 pairs per roll but full frame). At it turns out, the lenses are well matched and very sharp. I am pleased overall.

3. Horseman 3D. This is a perfect portrait camera and took it to take portraits of my nieces, but I barely shot a roll through the camera. If I had to do this again, I would leave this home.

4. Pentax ZX-M cameras & twin camera bar that allows separation from 5.5 inches (cameras touching) to 14 inches. It has been a while since I traveled with a twin camera rig, and I am glad I did. I took some nice hypers with this set (and also with just one camera). I took two pairs of lenses, 40mm & 20mm, both very compact. The 40mm lenses saw the most use.

5. Misc accessories, including a compact Metz flash. I managed to fit all the equipment in a medium-size (some people would call this large) camera bag but also packed a smaller bag for lighter traveling within Greece.

In Greece we spent 3 days in Athens and then a week in Santorini (a popular Greek island) and then back to Athens for 4 days. While I was in my 4th day in Santorini my RBT S1 stop advancing (I had problems before I left, so this was not totally unexpected). Traveling lighter, I had not brought the RBT X2 so I ended up using only the Pentax SLR cameras for hyperstereos in the last few days in Santorini. I had the X2 back in Athens. 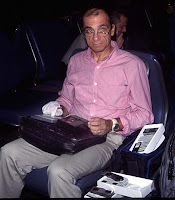 I like to utilize my travel time mounting stereo slides. My mounting procedure consists of two steps: First I cut and mount all the pictures in Albion aluminum mounts for preview. I then select the best and remount them permanently in RBT mounts. For this trip I decided to do the 2nd part and transfer the film chips from the Albion to RBT mounts.

For this I needed RBT mounts, a light table, viewer (Realist red button), scissors (to cut the edges of the full-frame film chips), gloves, markers, and related supplies. Before I left I checked the security information on line (http://www.tsa.gov/) and found that I can carry scissors, as long as they are shorter than 4 inches, which is fine. So everything went well. I was able to lay out my 3d mounting equipment/supplies and do a lot of mounting in a very small space, like the airplane food tray. Interestingly, no one asked me what I was doing or gave me any strange looks.

In the return trip (Greece to USA) the scissors were not allowed. So there was less slide mounting in the way back. Realist photographers might not need the scissors but for anyone mounting full frame slides they are important because the film chips often extend outside the mount and need to be trimmed.

While mounting en flight, I made an interesting observation: The low humidity environment in the plane results in a strong curling of the film chips (towards the emulsion side). This curling was so bad that I had to press the film chips with my fingers to keep them straight. Once we got back to the airport, the curling disappeared. Clearly this is the result of the low humidity.

Do x-rays harm the film? Through my travels, I have not seen any clear signs of x-ray damage to the film. Every photographer has the right to request a hand-search for the film. The security personnel will immediately tell you that x-rays are safe for film speeds of 800 ASA or slower and try to change your mind and let the film be x-rayed. Some people carry high speed dummy rolls, mixed with their standard rolls, to counter this “slow film is OK” argument. In any case, it is your right to request hand-search. This will delay you (and maybe others around you) but it can be done. In my 2006 Greece trip I had all 50 or so rolls hand-searched. For every roll they touched the film leader to a machine looking for explosives. It took a while but it was done.

For this trip I brought with me about 35 rolls of film. I had more film waiting for me in Athens (had left it in storage in 2006). I let my film be x-rayed in the way to Greece just to avoid the hassle of hand-searching, but I asked to be hand-searched when traveling back. No problem with Greek security with this request. But some of my rolls were x-rayed 3 times (to Greece, to Santorini, and again in the USA from Atlanta to Cleveland).

In order to avoid carrying exposed film in the way back, I was planning to have all my film processed in Greece. I had done this in the past with good results. Price for slide film developing in Athens is half the price in the USA and the quality is equally good. I figured that despite the closing of film developing places in the USA, it would be "business as usual" in Athens. Well, I was wrong. The professional lab that I took my film in the past, was closed and out of business. So, I had to bring my film back to the USA.

I came back with 42 rolls of film (plus 3 more rolls in the cameras, that I finished shortly) which I have already processed and mounted. This might sound like a lot of film for Realist photographers but have in mind that I am getting about half the amount of pictures in a roll of film with my RBT cameras than a Realist (only 13 pairs from the X2 and 15 from the S1, vs. 29 pairs from a Realist).

Overall, other than the lab closing in Athens, and the malfunction of the S1, things went OK, and I have some very nice pictures from this trip to Greece. I am especially happy with the twin and single camera hyperstereos (from the airplane or hand-held shooting). If I had to do it again, I would have taken my “other” S1, left the Horseman back, and I would have taken more film with me to Santorini. I plan to return to Greece in 2009 to run the “Classic” Marathon.
Posted by DrT at 2:55 PM 1 comment:

To understand the dilemma that RBT (or any person/company attempting to design a 35mm stereo camera) faces, consider the size of the full-frame 35mm film format: 24x36mm. The simplest solution for film economy, while maintaining full frame, is to have a full frame pair, separated by a full frame. This design will lead to the sequence: ABAB/CDCD/, etc. (the film can be cut every two pairs without splitting a pair) The only problem is that the minimum separation of a pair is 2 x 36mm = 72mm. That would have been the case if the pictures touched each other. With a bit of a margin between each pair, we arrive to the 75mm image (and lens) separation

1) Reduce the image size. Keep the same basic format (ABAB/CDCD/, etc, alternating advance sequence) but make the size of each picture slightly smaller, 33mm instead of 36mm. By cutting 3mm from each picture, we can reduce the spacing of the images and lenses by about 9mm. The result is a 65mm lens spacing (desirable) but the image size is smaller and the roll cannot be processed by automated machines. This is configuration A.

2) Leave a gap between each pair (i.e. have no images recorded between two pairs). In this case we can keep any spacing of images (and lenses) at the expense of film economy. This is configuration C. This configuration only gives 13 pairs per 36 exp roll (vs. 20 for configuration A).

Which format is best?

How important is the difference between 65mm and 75mm?

Some people will say that this difference is small. Some people will actually prefer the extra “depth boost” of the 75mm spacing. Those coming from the Stereo Realist format (70mm) should have no problem adjusting to 75mm. But, for me, coming from the gentle depth of the RBT S1 (59mm), the 75mm is too much. I do not like indoor shots taken with 75mm lens spacing. So I want 65mm. I also don’t care for full frame and I prefer film economy. The format of choice for me is A.

The RBT S1 camera follows a different format. For some reason, RBT designed the RBT S1 with a 59mm spacing. This leads to exactly half frame gap between each stereo pair. The film advance is fixed (20 perforations). Maybe this choice was dictated by the details of the film advance modification when joining the cameras. The RBT S1b uses a 45mm lens spacing but apparently the same advance sequence (and film waste) as the S1. This reinforces the idea that the details of the camera advance modification have led to this unsual format. I’ve heard that the RBT S1b was made especially for underwater stereo photography. Some people think that the 59mm spacing of lenses in the S1 is already too small, but personally I have grown accustomed to it.
Posted by DrT at 2:19 PM No comments:

The RBT Company in Germany has been joining 2d cameras to create 3d stereo cameras for quite a few years now. They probably started inspired by the work of Fritz Ochotta, linking Yashica cameras. Their web site is: http://www.rbt-3d.de/. The importer of RBT products in the USA is 3D Concepts: www.stereoscopy.com/3d-concepts/. Here is a list of the RBT cameras I am aware of:

From what I gather from the RBT web site, only the 109, X2II, X4, X5 and S2, S2b, S3, are currently produced. The 3d-Concepts web site lists as S3 a Voigtlander camera with Bessa R3 bodies. I am calling S3 the Zeiss Icon camera, following the RBT web site.