A friend recently sent me pictures from his NX1000 rig that were hopelessly out of synchronization. I had a few experiences like that of my own too. So, here are my recommendations on how to use the twin NX1000 rig to assure good synchronization:
[PS. Others have found other ways around this. One user keeps the lens caps on. This stops the cameras from focusing and if they cannot focus, they do not fire.] 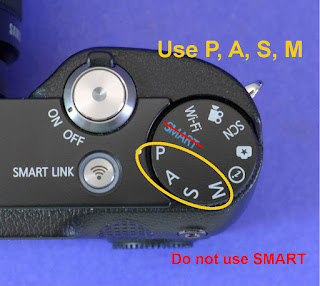 Do not use the SMART mode (this delays the camera in an unpredictable way – that was the problem with my friend’s pictures). If using a flash, use a flash that does not communicate with the camera. So, do not use a Samsung dedicated flash (this delays the camera that fires the flash).
In summary: If you have a pair that has passed the Flash Test, use the P, A, S, M settings, take your time to half press the shutter to focus, and nothing has changed in the focus and drive settings, then everything should be OK.

In case of trouble: If you notice a problem, lack of synchronization, or any unusual camera behavior, do not panic (“OMG, my cameras are broken!” – this was my reaction when I accidentally changed the focus to CAF and the cameras were clearly firing out of synchronization).  Calm down and examine the settings, make sure that you are using the same mode and shooting variables (f-stop, shutter speed, exposure compensation) on both cameras, make sure that the focus and drive settings are the same. Check that you have not accidentally bumped the zoom or switched to Manual Focus. Turn the cameras OFF and ON. If everything is set properly, the cameras should return to normal.

This picture shows how to use the center dial. The dial can be pressed in 5 different ways: Center, up, down, right, left, and it also rotates, plus there are 4 buttons at the corners around it. These buttons and controls have different functions depending on whether you are in shooting or in playback mode. 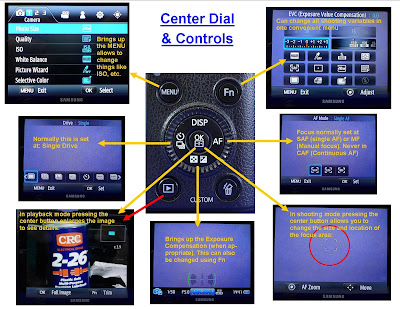 
If you have any tips about using the cameras, let me know.
Posted by DrT at 8:12 AM