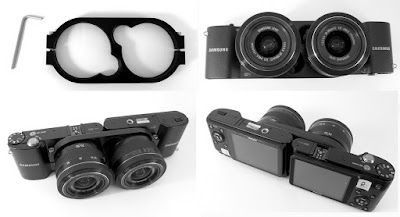 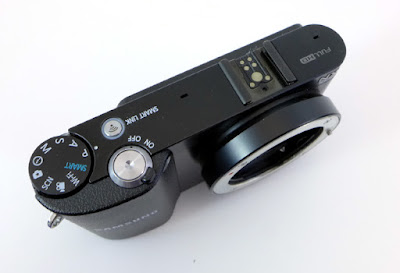 Metrics, useful to understand how the mounts works, are shown in the Figure below. In the original image from cameradescision.com, I have added extra dimensions, marked in red. The distance from the center of the lens to the “short” end is 34mm with the side lug removed or 36mm with the lug in place. So the closest the cameras can come to each other is 68mm with the lugs removed and one camera upside down, or 72mm without the lugs removed. 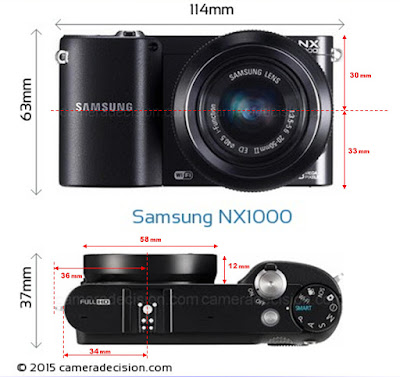 Currently the Werner-mount is made for two NX1000 camera spacings:
Other camera spacings can be made available for other Samsung NX cameras, provided that the lens mount is the same. I stock these mounts for sale in the USA.

How to attach the cameras to the mount:

1. Remove the lenses from the cameras.

2. Line up the cameras and mount as shown below. Note that the mount has two openings to provide access to the lens-removing buttons. Also, the mount has a tripod socket at the bottom. This helps orient the mount correctly. 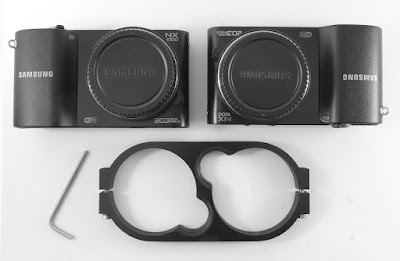 3. Insert each camera to the mount and flush the mount to the camera bodies.

With the cameras attached and the mount loose, there is quite a bit of freedom to move (pivot) the cameras up and down with respect to each other, sliding over the edge. This is shown in the upper row of the picture below where the cameras are moved to the two extremes. The bottom row shows the cameras aligned. 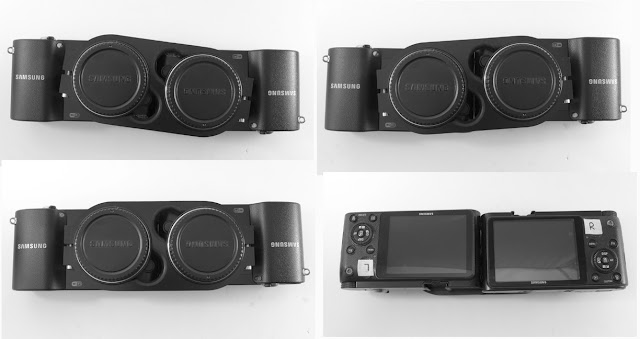 One intuitively might think that the camera bodies should be aligned. But this is not the case, because the lenses are offset by 3mm with respect to the camera body.

The cameras are approximately aligned when the bottom of each camera is flushed with the edge of the mount. This results in a slight offset of the cameras, where the right camera sits 3mm lower than the left camera. This is shown in the picture below.

So, to align the cameras, rotate them so that the bottoms are aligned with the mount.  It helps if you lay them on a hard surface (like a table).

You can also put a line (with white marker for the black body or black marker for the white body) to mark 3mm below the bottom of the left camera and align the top of the right camera to this mark.

5. After the cameras are aligned, tighten the two screws using the provided 2.5mm Allen (Hex) key.

WARNING: Do not over-tighten the screws! Use only slight hand pressure. This is enough to hold the cameras. I once tightened the screws so tight that the mount was deformed and the lenses would not “click” into position. So, be careful.

If you attach the lenses and turn on both cameras you will notice that the images in the screen are aligned, even though the cameras (and the screens) are not aligned (as we discussed, the cameras are off by 3mm and the screens are off by 8mm because the screen is off set in the opposite diction with the respect to the lens). That’s because the image is offset with respect to the screen (the space is taken up by the line with shutter speed/shutter and exposure compensation information). This is shown here: 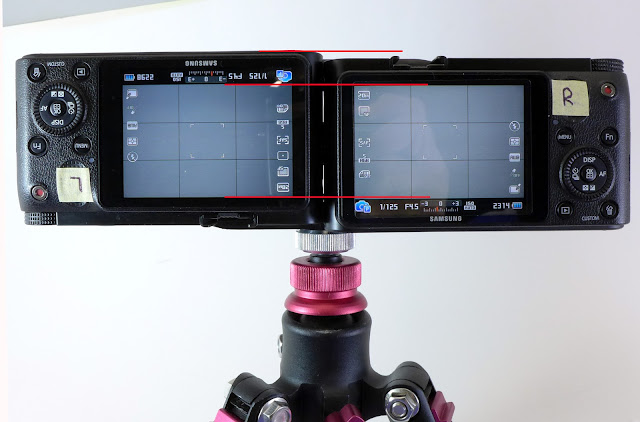 This alignment is good enough for me. Any slight errors will be corrected by StereoPhoto Maker (note: slight vertical alignment errors can be corrected, gross errors should be avoided). If you want near perfect alignment, you can use the standard 20-50mm, zoom the lenses at 50mm and observe that the same object is “cut” in the upper and lower edge of the screen in both cameras (check both top and bottom because the lenses might not be matched perfectly at this end). If they are not aligned, loosen the screws slightly and move the cameras to improve the alignment. Excellent alignment is shown here:

It is interesting that the image in the left camera is shown upside down, so it has the correct orientation for viewing. This way you can easily compare the images. Notice that the same objects are being "cut" in the upper and lower edges (red arrows). As a rule, to check alignment, always zoom in (if you have the option) to obtain the highest image magnification. Do not use heavy lenses for camera alignment as they might be rotating the cameras because of their weight, unless if these are the lenses you plan to use.

One last observation: Since the mount extends by 3mm above the camera's top, some flash units will not fit, if there is not enough clearance from the flash shoe to the flash body. From my two favorite compact flash units, the Nikon SB-30 fits without a problem, while the Fujifilm EF-X20 does not fit. For the units that do not fit, you can use a flash adapter, like the Hama tilt adapter shown below, to raise the flash higher. 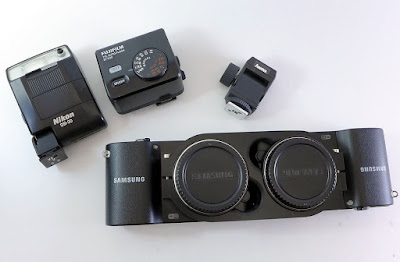 To remove the cameras from the mount:

- Remove the lenses
- Loosen the two screws
- Pull the cameras out

The procedure for attaching the 72mm mount (see below) is exactly the same. 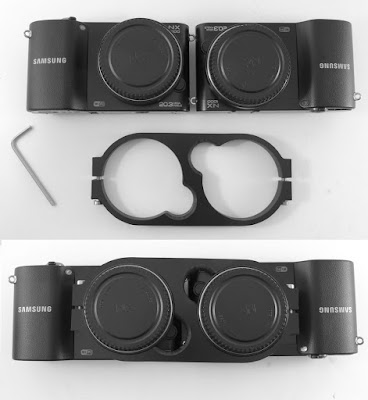 In summary, the Werner mount is very simple and guarantees good and stable alignment.  I am personally attracted to the functionality and simplicity of this mount. With the Samsung NX1000 cameras I am mainly interested in their minimum spacing. Variable spacing close to the normal spacing is not an attractive option for me. If I want a wider spacing, I will switch to the side-by-side configuration. The Werner mount takes very little space and weighs next to nothing. It has smooth edges so it will not damage other objects next to it. Even though I have made my own (traditional) z-mount, I now use the Werner mount exclusively.

In terms of cost, z-mounts can be expensive since if they are custom-made. The Werner-mount is manufactured in Germany using computer controlled milling. The material is some kind of plastic/composite (not metal). It seems to have sufficient mechanical strength to hold the cameras without a problem.

I would be interested to hear feedback from users of this mount.

I really appreciate for your efforts you to put in this article, this is very informative and helpful. I really enjoyed reading this blog. Keep sharing and give us updates.