What’s in My Camera Bag - I

It’s an interesting question… What do stereo photographers carry in their camera bags? I have addressed this topic in two Stereogram Tutorials (a collection of 20 years of Tutorials, available for sale here: http://www.drt3d.com/ohio3d/stereogram/)
In March 2011 I published a 3 page Tutorial (click to enlarge): 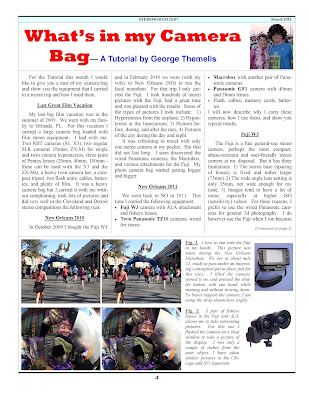 You can download the entire Tutorial here: http://drt3d.com/tutorials/CameraBag1.pdf
In this Tutorial I describe three different times, my “Last Great Film Vacation” in 2009, a visit to in 2010 with only the Fuji W1, and a return to in 2011 with a lot more gear. Here is what I wrote:

Last Great Film Vacation (Summer 2009)
My last big film vacation was in the summer of 2009.  We went with my family to   For this vacation I carried a large camera bag loaded with film stereo equipment.  I had with me: Two RBT cameras (S1, X3), two regular SLR cameras (Pentax ZX-M) for single and twin camera hyperstereos, three pairs of Pentax lenses (20mm, 40mm, 100mm - these can be used with the X3 and the ZX-Ms), a heavy twin camera bar, a compact tripod, two flash units, cables, batteries, and plenty of film.  It was a heavy camera bag but I carried it with me without complaining, took lots of pictures and did very well in the and stereo competitions the following year.
New Orleans 2010
In October 2009 I bought the Fuji W1 and in February 2010 we went (with my wife) to to run the local marathon.  For that trip I only carried the .  I took hundreds of stereo pictures with the , had a great time and was pleased with the results.  Some of the types of pictures I took include:  1) Hyperstereos from the airplane, 2) Hypostereos at the Insectarium, 3) Pictures before, during, and after the race, 4) Pictures of the city during the day and night.
It was refreshing to travel with only one stereo camera in my pocket.  But that did not last long.  I soon discovered the wired Panasonic cameras, the Macrobox, and various attachments for the .  My photo camera bag started getting bigger and bigger.
New Orleans 2011
We went back to New Orelans in 2011.  This time I carried the following equipment:
I then continue to describe why I carry these cameras, how I use them, and to show typical results.
Two years later (February 2013) I published another Tutorial on the same topic: 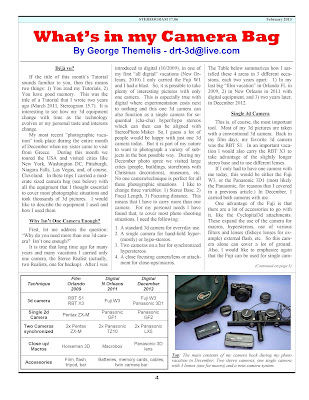 You can download the full Tutorial here: http://drt3d.com/tutorials/CameraBag2.pdf
In this Tutorial I explain why one stereo camera is not enough for me. For my personal needs I have found that, to cover most photo shooting situations, I need the following:
Here is how my camera bag looked in 2012: 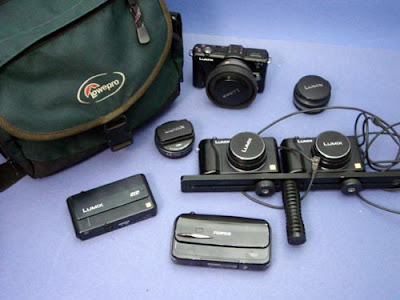 This table is taken from this Tutorial and summarizes the contents of my camera bag though the three points in time: 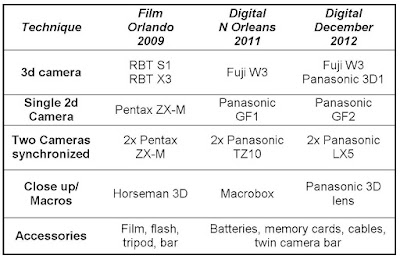 "Different people have different expectations and equipment requirements.  As the situation stands right now, no single camera can take the variety of pictures, from macros to hyperstereos, that I like to take, so I elect to carry 4 different systems when I travel.  I did this back in the good old film days and today in the digital era.  One advantage with digital is that I can fit all the equipment in one compact camera bag that does not weigh too much."

There were only minor changes from 2012 to 2016. The GF1 and GF2 bodies were replaced with the GX1 and then GX7. I also stopped carrying the , in favor of the Panasonic 3D1. I used to say that I do not take any normal stereo pictures. It is either hypo-stereo with the 3D1 or hyperstereo with twin cameras.
I continued along these lines until last year when I discovered the Samsung NX1000 cameras. With these cameras I rediscovered the beauty of “normal stereo photography”, i.e. stereo photography with a base approximately equal to the spacing of the eyes (68mm for this rig).
Because of their normal spacing in the z-configuration and good synchronization, this pair serves as a normal stereo camera and also twin camera with larger stereo base. It is also possible to use one camera for single camera stereo. This drastically changed the contents and size of my camera bag. I will describe this in the next blog.
Posted by DrT at 8:49 AM

Thank you for sharing this article and camera was only inside of my water proof camera bags and using my camera bag was very helpful and no hassle to our travel and we know our camera was safe.