A simple way to get an idea about how well a pair of Samsung NX1000 cameras synchronizes is to use the “Flash Test.” This test will also allow you to decide which camera will be the right (R) and which will be the left (L). It will also help you understand how flash synchronization is achieved and what can go wrong.
First, look at this timeline (click to enlarge) of flash use for twin cameras with mechanical “focal plane” shutters (which is what the NX1000 has). 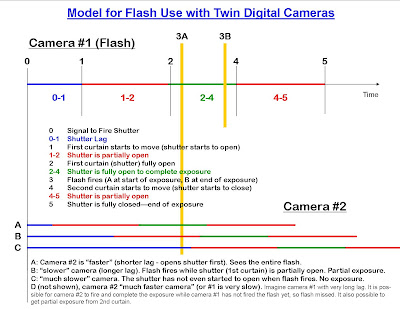 In these cameras there is a mechanical shutter and the flash fires only when the shutter is fully open. The shutter has two curtains, the front and the back, that travel vertically (in the NX1000). The time needed for the shutter (front curtain) to open determines the “flash synchronization speed” which is the fastest camera speed for which flash can be used. For the NX1000 this speed is 1/160s. This is about equal to the speed that it takes for the front curtain to open, exposing the entire sensor to light.
At instant 0 the camera receives the signal to fire the shutter. There is a very short delay (known as “shutter lag”) and the shutter starts to open at instant 1. The shutter is fully open at instant 2. After a very short delay, the signal is given to fire the flash (3A if the flash is fired at the start of the exposure). If the shutter speed is slower than the flash synchronization speed, then the shutter will remain open until 4, to satisfy the exposure. Then the second curtain will start to move (shutter starts to close) and at 5 the shutter is fully closed and the exposure ends.
This is the timeline for the camera firing the flash. If there is a second camera involved (as it is in stereo) then the question is, when the flash in camera #1 fires, what is the status of the shutter in camera #2?  When camera #1 fires the flash, what does camera #2 sees? (Camera #1 always sees the full flash exposure since it triggers the flash).
There are three possibilities, as seen in this figure:

Based in these concepts, here is how the flash test works:

Step 0: First, make sure that both cameras have the latest firmware (1.15). It has been reported that this helps improve synchronization. Connect the cameras (their remote plugs), using a method of your choice.
Step 1: Put both cameras in Manual mode (M) and 1/160 speed. The f-stop and ISO are not important. I use f4 and 100 ISO.
Step 2: Put the flash on camera #1, fire the cameras (the flash should fire) and note what camera #2 sees (camera #1 fires the flash so it sees the entire flash burst). There are three possibilities for camera #2: F: Camera #2 sees the full flash exposure, P: Camera #2 sees a partial flash exposure, N: Camera #2 sees no flash (misses the flash exposure).
Step 3: Switch the flash to camera #2 and note what camera #1 sees.
Possible outcomes of this test:

The picture above shows situation B. The right camera fired the flash. When the flash fired, the left camera's shutter was not fully open, so part of the image is dark.  (This picture also shows that in the NX1000 the shutter travels vertically, and opens from bottom to top.) Here is an estimate of the mis-synchronization of this pair:  The time it takes for the shutter to open is at least 1/160s (6.25ms). Probably it is a bit shorter, let's say 5ms. About 2/5 of the shutter has not opened yet. So, a rough estimate is that the two cameras are off by 2ms or 1/500s. That's not bad at all for most shooting.

The figure below is a variation of the previous one, applied for the NX1000 pair and summarizes the test and possible outcomes when using flash with the twin camera pair. In this figure I recommend starting the test at 1/100 but I have found little difference vs. doing it at full flash synchronization speed (1/160). 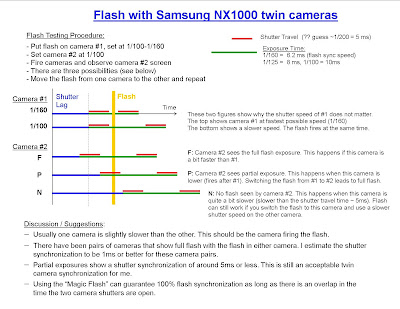 Designate R and L cameras: If one camera is slower than the other, make the slower camera fire the flash (for me, this will be the R camera). If the slower camera fires the flash, the flash will be seen by both cameras. So this test can also determine which camera should be the R and which should be the L. In the pair with the partial exposure above, the left camera is slower (shows partial flash exposure) so it should be the one firing the flash (which for me will be the R camera). When this camera was firing the flash, I was getting 100% flash success.

Our of curiosity, I wondered if I could capture a picture showing a band of light and dark top and bottom. This would be the case if the front curtain is opening while the back curtain is closing. For that to happen, the shutter speed must be higher than 1/160. In the example below, the right camera is set at 1/160s to fire the flash but the left camera is set at 1/1000. At this fast shutter speed, the back curtain starts to close before the front is fully open and the flash froze the action while both shutters are in motion. (PS. This is also a stereo pair with a normal stereo base, so it can be freeviewed)

Final Note: If flash exposures are important, they could be improved using the “Magic Flash”. This is a device made by Rob Crockett. See: http://ledametrix.com/magicflash/user.html
The Magic flash can guarantee flash synchronization as long as there is an overlap in the time the two camera shutters are open (so use 1/125 shutter speed, or slower - do not use 1/160).
I have found the Magic Flash to be useful with other Samsung NX cameras which do not show as good synchronization as the NX1000. Also, for other digital cameras (Panasonic, for example) that do not show good synchronization, due to “flash induced shutter delay.”
Posted by DrT at 12:34 PM