There are a number of questions/issues that I would like to discuss:

Note: I decided to break the topics above to more than one blogs, as they were getting quite long. I will revise these blogs as I gain more experience and get feedback and information from other users of this system.


The two big advantages are:

To understand the first one, look at this picture of the NX1000 from the top: 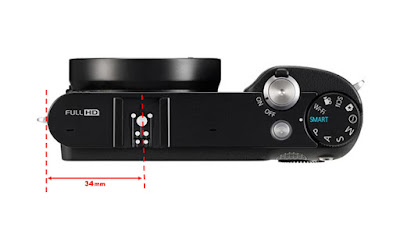 The lens is offset (off-center), more than other cameras of similar sensor size. When one camera is turned upside down, the lenses came quite close. How close? Depends if you remove the lugs on the short end of the camera:
- With the lugs in place: 72mm
- With the lugs removed: 68mm

I personally try to get the lens spacing as narrow as possible. I started in stereo photography with a Realist (70mm). Later, I got an RBT S1 (59mm) and I enjoyed using the RBT a lot more because of better image quality, wider images, and also because I was able to get closer to my subject, thanks to its smaller lens spacing. With digital, I find Fuji’s 75mm to be too much in many situations. Panasonic’s 30mm is good for close-ups but falls short for normal stereo. For me, the ideal stereo camera has a lens spacing around 50-60mm. The 68mm possible with the NX1000 is still a bit larger than the ideal for me, but better than many alternatives. So, the narrow lens spacing is the biggest attraction for me in this twin camera rig.

Given my desire to reduce the lens spacing, I removed the lugs from my cameras. There are two ways to do this: You can open the camera to remove them, or you can cut them/grind them off. I tried to open a camera until I reached the point where I was uncomfortable digging in further. It is not easy. So, I ended up cutting the lugs and filing smooth what’s left. This of course reduces the value of the camera if you ever need to sell it as a 2D camera but I think it increases the value is sold as part of a 3D camera. Here is how my cameras look with the lugs removed. Not particularly pretty, but functional: 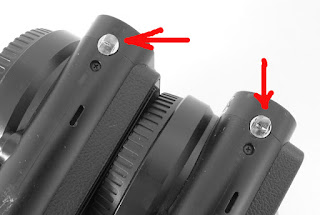 
The cameras can be mounted in 4 different configurations:
- Z-configuration
- Side-by-side
- Bottom-to-bottom
- Top-to-top

A traditional Z-mount holds the cameras from their tripod sockets. As far as I know, there is no commercial traditional z-mount for sale, but some people (myself included) have made their own. Following instructions from Bob Karambelas, I used a twin aluminum channel and cut it, to produce the z-mount shown here: 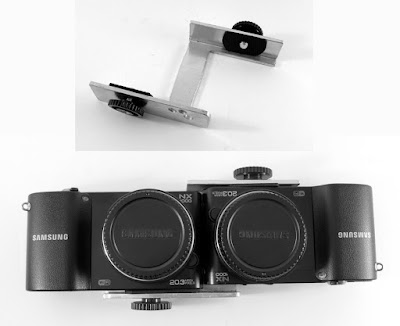 Here are a few notes for anyone thinking of doing the same:

- I measured the cameras and made a quick diagram: 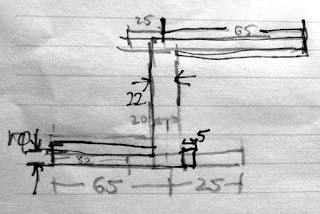 This is a poor sketch with overlapping revisions, but the main points are: Center "Column" is 20mm. The legs extend 65mm from the center to one side (the other side can be omitted, this makes cutting easy). The step that holds the cameras aligned should be 12mm in height (I made it 10mm but forgot to account for the fact that the cameras will be raised a bit - see below).

- After I cut the main  piece, I drilled the mounting holes by measuring the cameras. I made these a bit larger to have some freedom to move the cameras. Ideally, these holes can be elongated channels to make it possible to change the camera spacing. Finally, you can tap a mounting tripod hole (I had to learn how to do that). For finishing touches, round all edges.

- The distance between the top and bottom edges of the channel is 69.4mm while the cameras are 63mm tall. To take care of the extra space, I used a pair of rubber pieces (seen in the picture). This brought the cameras to good alignment. Bob used card stock to achieve the same goal. The only thing needed is a pair of tripod screws to hold the cameras.

Another option is a “universal z-mount”. This can work for any pair of cameras, including the NX1000, if the top and bottom bars of the mount are spaced appropriately. With the cameras mounted in moving platforms (see picture below) it is easy to adjust their spacing. I discuss this in a separate blog. 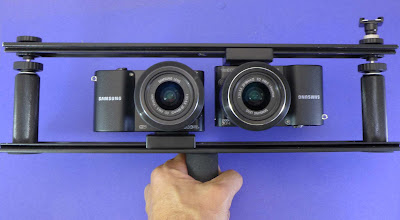 The Werner-mount is unique in this camera system. It attaches to the cameras from the lens mount (see picture). This leaves the bottoms and tops free. 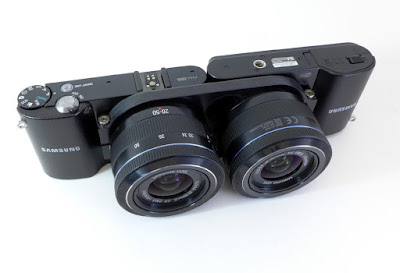 The cameras are aligned well and cannot be bumped out of alignment. But they also cannot be converged and their spacing is fixed. The rig looks and functions pretty much like an RBT film camera. The only accessory possibly needed is a camera grip to attach to the bottom of the mount, to hold the rig better. Because of the importance of this mount, I discuss it further in a separate blog here: http://drt3d.blogspot.com/2016/10/z-mount-for-samsung-nx-cameras.html


The NX1000 cameras are not particularly wide (again, compared to other cameras of similar sensor size – compact cameras with small sensors are generally smaller) so even when placed side-by-side, they come quite close (as close as 114mm, the length of the camera, when touching each other, or 125mm, about 5 inches, with space for remote cables that attach to the side). 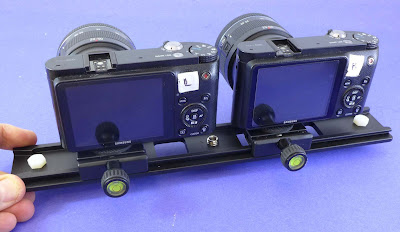 You can use any twin camera bar for this, there are many choices. My personal choice is a twin camera bar with sliding platforms that I make (and sell) myself. It is lightweight and offers easy adjustment of camera spacing. I discuss this bar in a separate blog.


The Samsung NX cameras have the tripod sockets centered with the lens so it is easy to mount them bottom-to-bottom using only one piece of screw. I sell a kit that is useful for mounting these cameras bottom to bottom. I discuss this configuration is a separate blog.

When mounting the NX1000 cameras bottom-to-bottom, they come as close as in the z-configuration (66mm if the bottoms touch). So, why would anyone select this vs. the Z? I can think of one reason: The mount (a simple piece of screw and some felt material) is simple and inexpensive.


With the tops touching, the lenses come even closer (62mm) but the mount can be awkward plus you also lose the wider aspect ratio. I am not sure why would anyone select this, but you never know.

One disadvantage of the bottom-to-bottom and top-to-top configurations is that you lose the wider landscape aspect ratio. It works fine for square or portrait aspect ratio. Also, you get a lot of pixels with these cameras so you can always crop a square image to a landscape ratio.


Compared to the other system I have worked with, the Panasonic micro 4/3 cameras (GX1 and GX7), the Samsung NX1000 cameras come closer to each other in all configurations, but the biggest draw for me is that the lens spacing is about normal in the z-configuration.