Ochotta Stereo Camera - How it all started 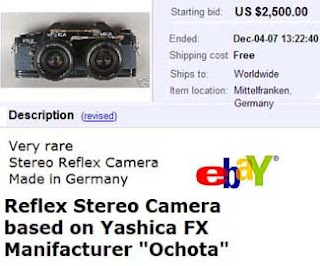 It all started last December when I saw an auction in ebay with the strange title: “Stereo Reflex Camera, Manifacturer Ochota”.

The pictures showed a stereo camera that looked very similar to an RBT SLR type camera, but it was not made by RBT. I was intrigued and attracted to this camera and the two coupled Carl Zeiss Contax lenses (Distagon 35mm f2.8) but I did not need another stereo camera so I let it go. The opening bid was $2,500 and the auction closed without any bids.

A few days later, at a moment of weakness, I emailed the seller to ask if they would accept an offer. The seller (Sissi Stanek, well known stereo photographer, see her web page: www.stanek.name/) accepted the offer and so in late December I became the proud owner of this camera.
That was the beginning of a new obsession for me. In a very short time I have learned quite a bit regarding the Yashica/Contax SLR cameras, and the German genius who built stereo cameras out of them.
Posted by DrT at 4:38 PM