This is part III of a series of blogs regarding using twin Samsung NX1000 cameras for stereo and deals with ways to fire the pair of cameras.

Most Samsung NX cameras can be fired via the camera's micro USB port. This is on the longer side of the camera, which is fortunate because it makes the z-configuration possible. 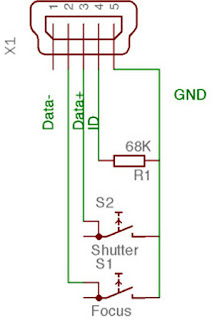 The schematic above (from:  https://antibore.wordpress.com/2013/04/30/diy-remote-shutter-release-for-samsung-nx20-nx210-and-nx1000-cameras/) shows how the remote uses the micro USB port for shutter remote control. There is a resistor between pins 4 and 5. Focus is achieved by shorting pins 2 and 5, and the shutter is fired by shorting pins 3 and 5, but only if the resistor is present. The resistor is built into the specialty cable used for remote control of the NX cameras.

This is a picture of a typical Samsung NX remote cable: 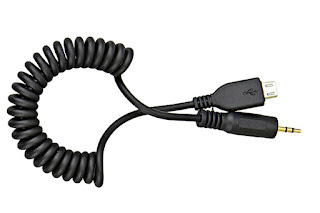 There is a male micro USB plug on one side and a 2.5mm plug on the other. What is not seen is the built-in resistor that makes it work as a shutter release cable for the Samsung NX cameras.

To fire two cameras at the same time, you need to connect two remote cables into one switch.

Here are some useful products for firing a pair of Samsung NX cameras: 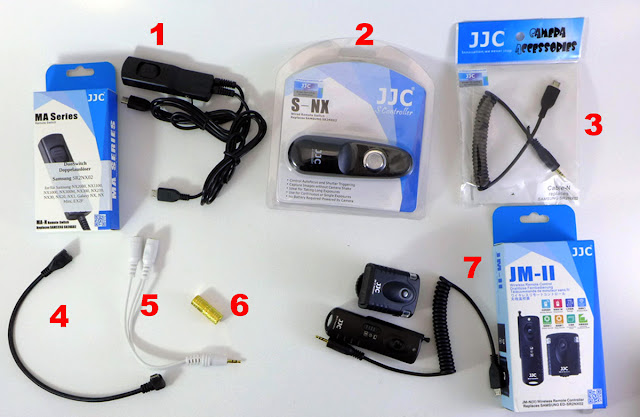 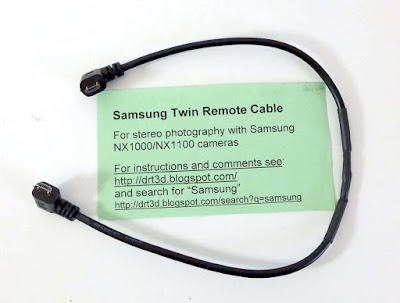 Here are some connecting options:


A. Twin remote (1): This is a complete solution. Connect each plug to each camera and fire the cameras by pressing the switch. This remote is a bit bulky (long and heavy) but the cables are of good quality. The switch has a plug on the side (see picture below) where you can attach a wireless remote to fire the cameras from a distance. This is the remote that I use most often when I use my adjustable z-bar. 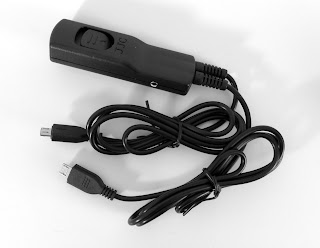 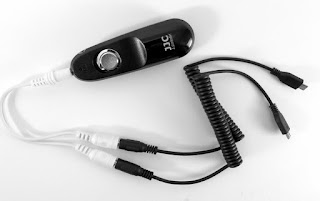 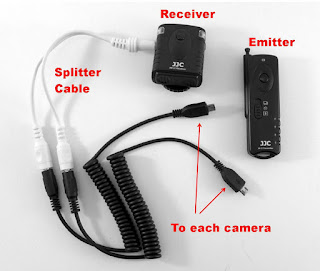 If you have pair of wireless remotes, you can fire the cameras without connecting the cables. Attach each receiver to each camera and fire both cameras with one emitter.  I am not sure how this affects synchronization (my feeling is that it does not). The advantage is that you can separate the cameras at any distance, since they are not connected with wires. 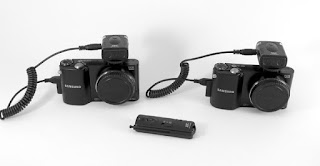 A comment regarding wireless remotes: While these need power (batteries) to work, you can still fire the cameras by pressing their switch even without power. 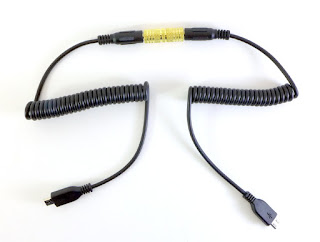 E. Single Remote. A simpler version of the above is a remote wire made by Werner (8, above). This is a simple piece of cable that has a resistor built in. The ends are 90 degrees. This is the simplest way to connect the cameras. Since this cable does not have a switch, the cameras must be fired by pressing the shutter button of either camera. This is how a pair of cameras looks, mounted on a Werner body mount and fired with the simple Werner cable: 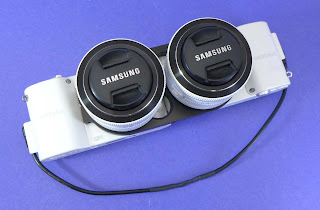 One peculiarity of the twin remotes is that when one camera is turned off, the other camera will fire. Or when one camera is turned on while the other is off, the camera will fire. This is happening because the camera that is turned off acts as a closed switch. To avoid this, at first I tried to turn on (and off) both cameras as the same time. This created a problem: If the cameras are turned on at almost the same time, then only one detects the remote (the one that actually turns on first). Werner told me that this is happening because the cameras send a pulse at startup to detect the remote. If the pulses are too close to each other, the second one is missed. To avoid this problem, I have turned on the menu option to "Sensor Cleaning at Start-Up" (I discuss camera settings on another blog) . I first turn one camera on, then the other. Because of the delay to clean the sensor, the cameras do not fire and they both detect the remote. When I turn them off, I just turn both off at the same time. Once I started doing this, I am not getting any extra firing. 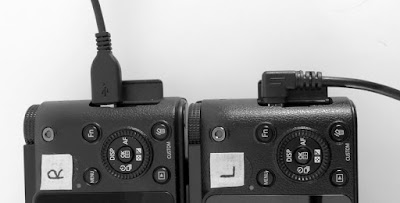 You can get a pair of 90 degree extension cables with Right and Left orientation. If you connect the R cable to the R camera and the L cable to the L camera, in the z-configuration both cables point down as shown in this picture: 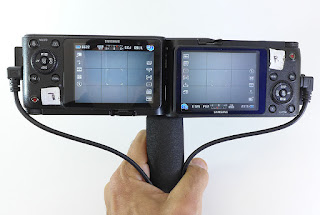 If you have a problem with one camera not responding to the remote, try these solutions:

One last but important note: If you are using auto focusing, you must half press the button (of the camera or the switch) for the cameras to lock focus before pressing the shutter button fully for the cameras to fire. If you hurry, the cameras can focus at different times and synchronization will be off.