Dukes Stereo Opticard - Possibly the best stereoscope you will ever own


In the pantheon of stereoscopic viewers, I think this one deserves a special mention. This is a stereoscope that was created by John Dukes.

John writes (in the instructions): “This viewer grew out of my frustration with the disparity between what seemed to be magnificent photographs on some of my old viewcards, and the dismal system I had for viewing them. Having fought the battle to bring “ortho” viewing to View-Master slides, I wondered if it might be possible to view cards awe well.”

He continues: “Every cards I looked at seemed to be improved with lenses shorter than the roughly 200mm focal length system in most Holmes slide viewers. So I used 100mm (focal length) lenses and was astonished at the impact. And several of my cards seem to be so life-like that I wondered if maybe they were in fact photographed with 100mm lenses! But ALL of the cards were much more fun to view. I hope you will agree.” 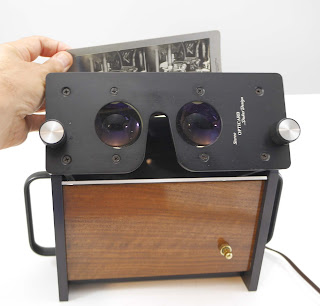 John build his first Opticard around 2002. These were sold directly to stereo enthusiast by John and also through Jon Golden of 3D Concepts.  I do not know how many viewers were made, probably around 50-100 (John told me around 50). They rarely show up for sale. In a photo-3d posting, Jon Golden mentioned that the last run of 20 viewers was ready for the 2004 NSA Convention.

What is so special about this stereoscope is that it does not use prismatic lenses. Now, prismatic lenses are required when you have stereoscopic images that are wider than the spacing of the eyes. John solved this problem by using achromatic lenses of very large diameter and short focal length. The large diameter takes care of the mismatch between eye separation and stereo pair separation. The short focal length produces large magnification to see all the details in the image. That's the summary.

And here is my personal experience (recorded through an ebay sales description – sorry if some points are repeated):

I bought this stereoscope around 2004. I know John Dukes personally and I admire his ingenuity and stereo skills. He has produced other amazing products too.  I used the viewer for a couple of days, and then put it away.  I did not touch it until a couple of years ago. I am not a big stereoview collector and do not make stereoviews of my own. So, back around 2008 I was going through the house, looking for things to sell.  Since I have not used this viewer for 4 years, I pulled it out to sell it. I did a bit of research and found 2 units sold with the last year for about $800. I decided to test the viewer, and looked at some stereoviews that I was selling on ebay.

I WAS IMMEDIATELY  BLOWN OUT OF THE WATER!!!

The amount of detail I could see was just astonishing! I have a couple of stereoviews showing stereo cameras or stereoscopic equipment, but I could not see much detail, even though I was using a top-of-the-line stereoscope with achromatic lenses.  Everything was clear and right there with this viewer. I could see the MAXIMUM AMOUNT OF DETAILS!  It was a pure joy!

My immediate thought was "I am not selling this treasure".  There is no other stereoscope in the world that shows this amount of detail.  Not only that, but the lenses' spacing is adjustable, so I can fuse all stereoviews (except for the totally-mismounted ones).  Despite the very high magnification, this viewer is the most comfortable to use.

Why is this stereoscopic viewer so good?

The power of this viewer comes from the 100mm FL lenses which is about half the FL of standard stereoview lenses.  Magnification ~ 1/FL, so the shorter the FL, the higher the magnification. I don't know of any other stereoscope with higher magnification (correct me if I am wrong).

The lenses are achromats.  But, there is the trick: They are not prismatic.  But how it is possible to view 3" (80mm) separated stereoviews with our only 65mm separated eyes, without using prismatic lenses?  The answer is to have large enough lenses with adjustable interocular (distance).  And this is exactly what we have here. 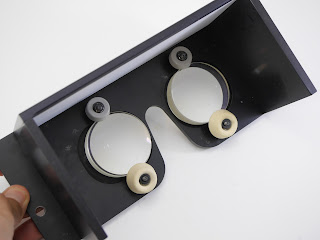 Look at the pictures.  The lenses are held in a way that can be shifted, independently and by hand.  Very primitive, but you know what, IT WORKS! 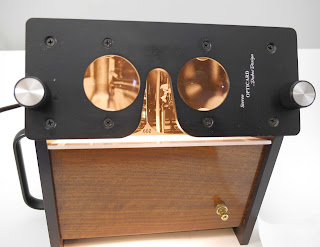 The light is provided by a fluorescent bulb.  It is bright and diffused.  The stereoview is inserted as seen and it just sits in place.  The viewer is rather heavy, thanks to anodized (black) machined metal.  The two handles are just great!  They allow you to hold the viewer comfortably in your lap. 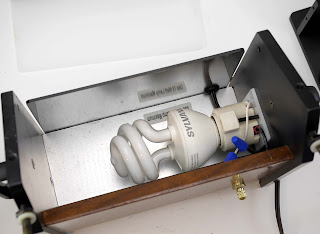 I was wondering... Since this is basically a simple viewer, does it have to be so large and so heavy?  But it works surprisingly well.  John Dukes has designed a no-nonsense devices, simple, yet solid and very effective. It does the job with flying colors. 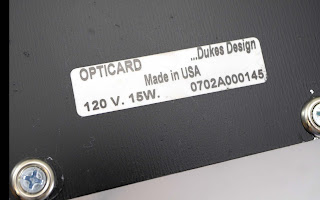 How many of these were made?

I believe around 100.  The serial number in the one pictured here is 145  (the numbering started at 100, not 1)... That's all for now. If I learn something new about this viewer, I will update the information here. 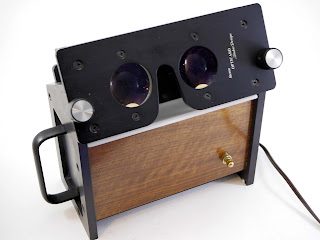 I saw one of these at an NSA convention years ago, and was amazed at how good the Keystone stereo cards looked in it. The only negative comment I have heard about it was from David Starkman who said it magnified the flaws in some cards - flaws he did not notice with other stereo viewers.

I see that the light source is in the bottom. How did he manage to get an even illumination on the cards? What is the light path?