How I made Man In Space Using Only SPM

Last night I attended the Detroit 2015 International Stereo Exhibition in our Ohio Stereo club. I saw a picture by Robert Bloomberg showing the Astronaut sculpture in Salt Lake City (see bottom for more details) and a small picture of the Earth was added in the upper right corner. I was there too (in SLC for the NSA 2015 convention) and took similar pictures. As a matter of fact, I entered a picture of the same sculpture in the same exhibition, but it was not accepted.

This gave me the idea so when I came home that night, I created this (click to enlarge if you need to):

Here is how I did it:  First I found my Detroit entry. As I said, I took several pictures of this. I believe I took this particular one using my twin Panasonic LX5 cameras so it has quite a bit of depth. The sculpture is up high so it can be framed with the sky only in the background, or it can be framed with buildings. I tried to avoid the buildings to create the illusion of floating in space. I like this picture because it is “pure and simple”. Here it is:

I then found a picture (2d) of the moon that I took last month using my Questar 3.5 telescope and a Panasonic GX7 camera. The focal length of the Questar is 1350mm and my micro 4/3 camera has a half size sensor so the “full frame equivalent” focal length for this picture is a very long 2700mm, that’s why the moon spills a bit of out of the picture. This is fine because I wanted a big moon. Here it is: 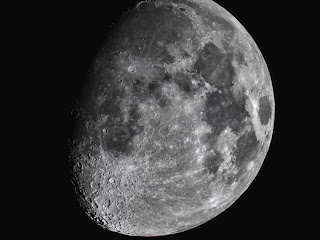 1. Open the Astronaut stereo picture and save it in separate L and R images (“File”, “Save Left/Right images…”) This will be the logo.

2. Load the moon as a stereo pair (“File”, “Open Left/Right images” and then use the moon both times, so you end up with a flat stereo pair of the moon). This is the main picture that will serve as the background. Hit the Right arrow key to adjust the stereo window and push the moon a bit back (at what will be the infinity of the combined pair). I am aware that the moon could (maybe "should") be pushed even farther back but I am afraid the resulting image will have too much deviation. This issue would be alleviated if the astronaut pair had less deviation. Also, I could have used a 3d picture of the moon but this is not appropriate here when the moon is supposed to be far away.

3. Go to the “Edit”, “Add Logo” and work out the menu details to create the stereo pair you want. Here is how the menu that created my stereo image looks (hit enter to enlarge): 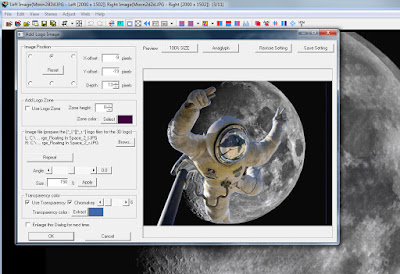 Regarding the details in this menu: I hit “Browse”, found my left Astronaut picture (from #1 above), the program loaded the stereo pair. I checked “Use Transparency” and with the color picker that came up I touched the blue background of this picture. I adjusted the sliding scale next to it (set to 6) and hit “Extract”. This eliminated the background from the “logo” picture. I adjusted the “size” of the logo so it fit well with the moon. I adjusted the “Depth” (set to 13) to make sure that the Astronaut is separated from the background and Image position (instead of typing numbers in these fields you can use the mouse cursor, hold the left button and move the image where you want to). And when I was done, I hit “OK”.

This involved a bit of trial and error. When you hit OK you go back to the program and can check your stereo pair (easy in my interlaced 3d monitor). If you do not like the results you can undo the Add Logo function (“Edit”, “Undo” or CTRL Z) and try again. The program remembers the last settings which is nice. Keep changing things until you get it just right.

I have used the “Add Logo” function before, so the entire process took less than 30 minutes. I think this is quite fast for a combined stereo image where a lot of variables (like sizes and relative depth of the two images might) need to be adjusted by trial and error.

One advantage of the Add Logo function: You can see any changes that you make while the Add Logo dialog is opened, in 3d. Click "Anaglyph" next to the Preview (right side). This includes things like changing size, changing image position, and (especially) changing depth.

Note: This was possible only because the background of my Astronaut picture (or whatever you select as “logo”) was uniform and could be extracted. If you have a more complicated picture then you have to use photoshop or perhaps Topaz Remask, a program that does exactly that, removes the background from an image. I have never used layers in photoshop and have not figured out how to use Remask, but I know how to use StereoPhoto Maker.

If you are interested in this sculpture, here is what I found in this source:
http://www.geekpittsburgh.com/art/salt-lake-flying-objects

Michael Bingham returned to Flying Objects in 2014 with an equally ambitious creation entitled The Curious Voyager. Instead of an animal, Bingham chose an astronaut as the centerpiece for the sculpture—replete with a mirrored face mask—with the human space traveler floating upside down as he observes the streets of Salt Lake City below him.

“I’ll admit, I had just not too far back seen the movie Gravity and was really intrigued with that, with just the idea of weightlessness,” Bingham explained to the Herald Journal. “But that’s always been interesting to me. I’ve always been fascinated by astronauts.”

If you enlarge the picture you can see me and fellow 3d photographers reflected in the astronaut’s suit (helmet?). I was there with Ron Fross, John Bueche, Diego Ruiz (check the first picture below - this is what the dedicated photographer will do to get a different point of view), Peter, George Philosophos, Takashi Sekitani, and others. We were taking a tour of Salt Lake City on Wednesday of the convention week and the bus dropped us somewhere in the area. You could not miss this sculpture. I actually have a picture of all these guys photographing the same sculpture. By the way, Ron Fross won an award in the on-side stereo competition with one of his pictures of this sculpture. These are halves of stereo pairs: 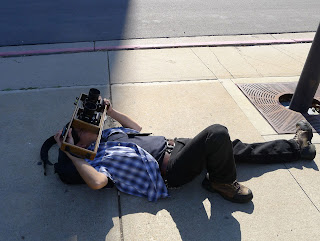 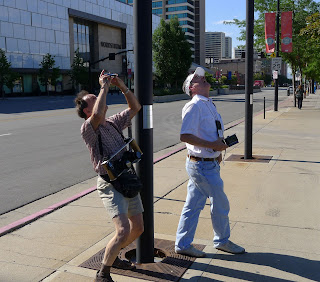 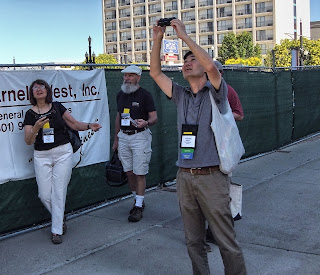